In the words of Wikipedia:

OpenBSD is a free and open-source, security-focused, Unix-like operating system based on the Berkeley Software Distribution.

Someone was bragging on IRC about how secure OpenBSD is compared to everything else, but this came without concrete evidences.

Tired of having to endure this once too often, time was spent documenting OpenBSD’s security features:

Because, in the words of Ryan Mallon:

Threat modelling rule of thumb: if you don’t explain exactly what you are securing against and how you secure against it, the answers can be assumed to be: “bears” and “not very well”.

While the website as a whole might be considered petty, it has been written (mostly) in good faith, and aims at being as thorough as possible, to foster fair conversations on OpenBSD’s security properties and designs. A great example of properly designed and thus effective mitigation is Apple’s Towards the next generation of XNU memory safety: kalloc_type blogpost.

But there are not a lot of public exploits against OpenBSD, so it must be secure!

There isn’t a single one (beside DoS) against TempleOS, Redox, MINIX, Haiku, MenuetOS, … Does it mean that they’re more secure than OpenBSD?

But OpenBSD has a lot of mitigations, so it must be secure!

When the talk was announced, a lot of people reacted by mentioning that OpenBSD has a large amount of mitigations, documented on the innovation web page, with papers on the events and papers one.

Someone even made a fun picture: 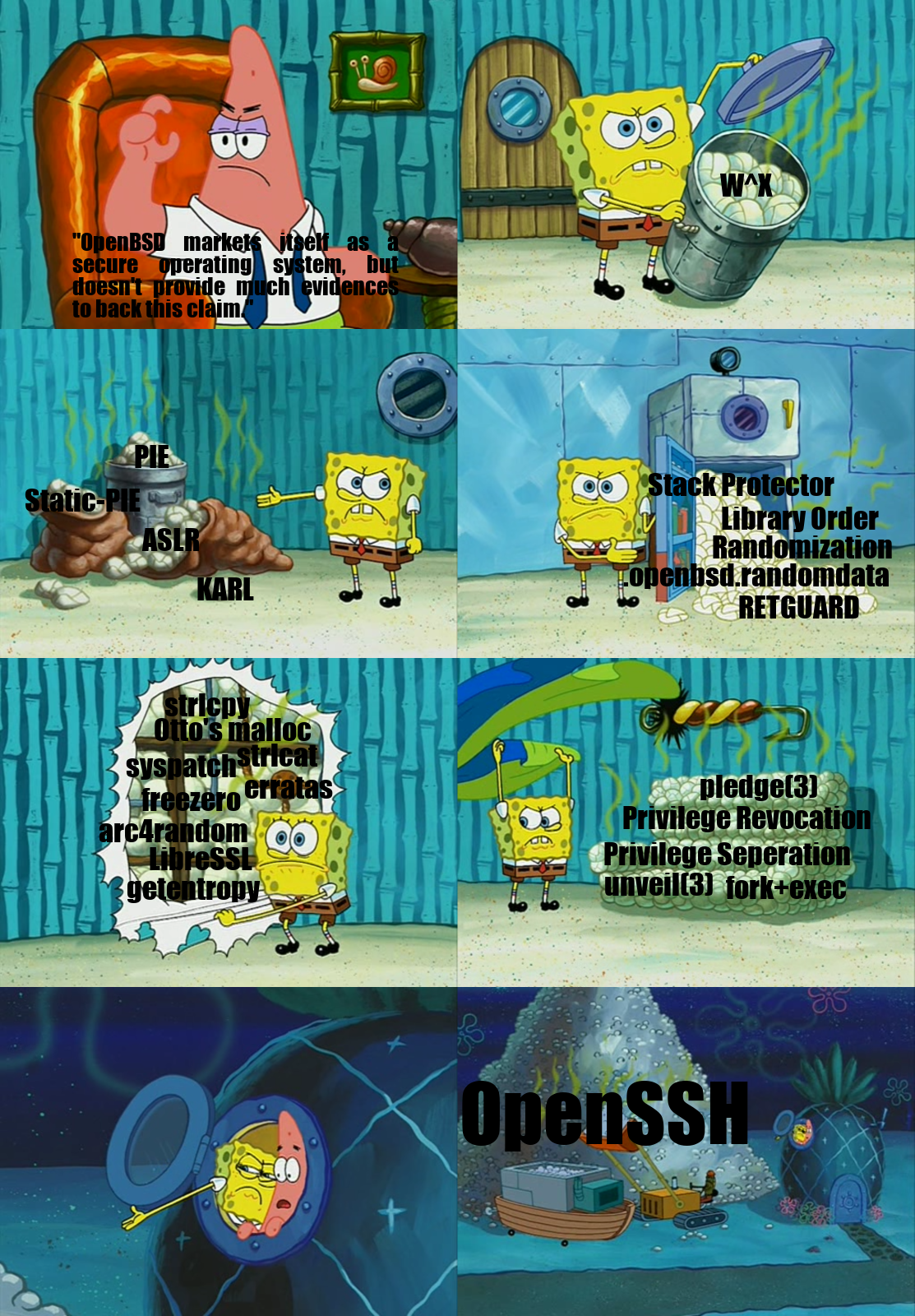 Unfortunately, having a lot of mitigations, doesn’t mean that they’re good.

Only two remote holes in the default install, in a heck of a long time!

This metric alone isn’t enough to properly assess the security of an operating system.

How should one properly design and implement mitigations, Mr. Smarty Pants?

Before you ship a mitigation:

Follow good coding principles - avoid functions with hidden side effects that are not visible from the name etc. - the stringency of the code review should at least match the stringency of a picky C++ readability reviewer, if not exceed it.

He also gave a great keynote at BSides Zurich 2017 on the topic: Repeated vs. single-round games in security.

Why was this website made public at a conference? Why didn’t you work with the OpenBSD community?

Because the OpenBSD community is notorious for not being nice and welcoming:

This website was done because studying mitigations is fun, not to get involved in a huge flamewars or endless bike-shedding on mailing lists.

Please do send me an email so that I can be fixed.

Where can I get the kick-ass “Got hacked” OpenBSD t-shirt that stein was wearing on stage?

Why so much negativity and sarcasm on the quotes webpage?

Because I didn’t managed to find positive quotes from security professionals about OpenBSD, but if you know any, I’ll be happy to add them.

What sources were used?